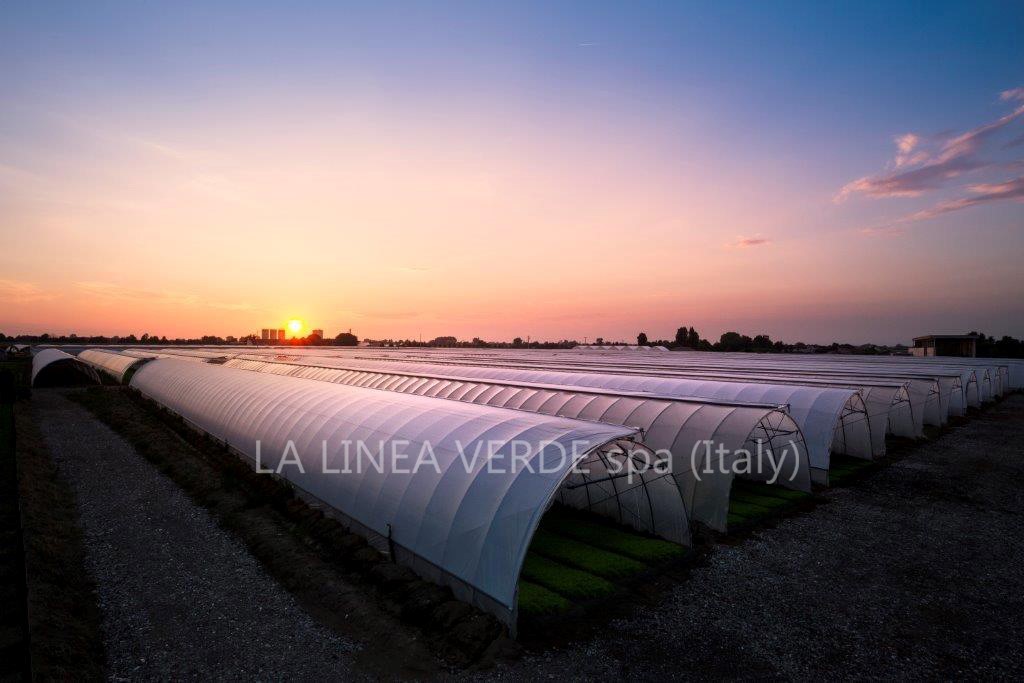 La Linea Verde Spa, European market leader in the fresh-cut salads sector and the first producer of baby leaf salads in Europe, has opened an 8-hectare tunnel installation with an automated rolling system using the BASIC5® Reflex BW thermal screen. This is a breakthrough in the horticultural sector, highlighting La Linea Verde’s status as a cutting-edge company with a desire to break the traditional mould, in tandem with agronomist Carlo Bignami and Aduno Srl’s BASIC5 Reflex BW thermal screens, specifically designed for horticulture.

The Chairman of La Linea Verde, Giuseppe Battagliola, is a keen innovator with in-depth knowledge of the fresh-cut salads sector. He has chosen a solution that transcends the traditional shading options of whitewash and tape shading nets, a strategy that has already offered notable benefits to crops grown in systems created and tested by his company.

Since 2014, La Linea Verde (2017 Group turnover: 238 million euros) has been testing the BASIC5 Reflex BW thermal screen (65 and 85 versions) on tunnels and multi-tunnels on its farms in Italy and Spain. The results in terms of yield, quality and production consistency convinced Giuseppe Battagliola to create a large-scale system with this application, unprecedented in the sector, on his original farm in Manerbio (Brescia, Italy).

The entrepreneur and the agronomist: in-field collaboration

Giuseppe Battagliola has always been at the cutting edge. In his search for new developments he found expertise and experience in his collaboration with Carlo Bignami, an expert agronomist in the horticulture sector and a supporter of the use of automated thermal screens. We asked Carlo Bignami to explain the technical advantages of this type of system.

The traditional shading systems for horticultural crops feature the use of tape and/or whitewash shading nets. There is twofold innovation in this brand new system: a thermal screen is used both with a shading function and in rolling installations. Could you start by telling us exactly how the thermal screen, in particular the BASIC5 Reflex BW, differs from the traditional horticultural shading methods?

“There are several differences. One big advantage is that the BASIC5 Reflex BW thermal screen is not affected by variations in shading, either over the years or in the course of a day, even as a result of strong sunlight, meaning that light transmission is always constant over time. This guarantees greater protection and greater uniformity for salad crops, as well as all the benefits of an automated system. This means higher evapotranspiration rates and therefore higher photosynthesis, with a lower risk of scorching leaves … In particular, cultivation is optimized with the BASIC5 Reflex BW thermal screen thanks to its open structure and special black and white strips (black for maximum shading and white for maximum reflection of sunlight)”.

Let’s talk about the rolling system, which is a real innovation in horticulture. Why was a screen with these features chosen?

“The structure and application of this thermal screen in rolling installations in tunnels mean that the strips are always placed parallel to the plastic film. This creates uniform internal light all over the cultivation area. There is also greater cooling as the white strips are on the outside and the black ones are on the inside”.

And then there’s the factor of movement.

“Absolutely. The movement of the shading system means that the crop is given the maximum possible light depending on the season, the temperature and light intensity: so it’s open when the sky is cloudy, with low temperatures, at the end of the cultivation cycle, in the morning, in the evening and at night. What’s more, fewer pathogenic fungi develop at the end of the cultivation cycle as the earth can be dried. Crop residues can also be dried quickly”.

So there are variations in the type of light transmission. What have you been able to ascertain in this respect?

“The amount of light passing through is mostly direct and partly diffused. This combination makes growth more compact and uniform”.

In conclusion, why would you recommend installing the BASIC5 REFLEX BW screen in an automated rolling system?

“The movement of the thermal screen enables roots to develop more extensively and grow downwards (geotropism). It also allows leaves to grow more consistently. This means greater resistance to heat and light, with the result that more light can be given throughout the cultivation cycle. This results in a greater yield per square metre”.

Let’s also remember that BASIC5 thermal screens have been in use since 2014 at the Spanish headquarters of La Linea Verde Navarra, where an 18-hectare system has already yielded excellent results. In this case, the company opted for BASIC5 COMBOSCREENS. Can you give us some technical details?

“We constructed the shading system in Spain inside a multi-tunnel structure, putting a double internal system parallel to the ground: a manually-operated black net with 40% shading rate (BASIC5 Umbra B 40), which is closed between June and the end of August, and a screen with 65% shading rate (BASIC5 Reflex BW 65) and automated operation with settings adjusted according to the season”.

Optimizing the climatic conditions inside seemingly simple structures like tunnels and multi-tunnels is a challenge, which can be faced with this breakthrough in the fresh-cut salads sector, which has so far received little technological attention.